The Triton TR80 is a nephelometric turbidity sensor designed for use in water and wastewater. Turbidity, the cloudiness or haziness of a water sample, is caused by particles suspended in the water, typically clay and silt. Since bacteria and viruses can be attached to these particles, turbidity has become a critical indicator of the overall water quality.

The Triton TR80 uses an optical method for determining the turbidity suspended solids, a light beam is directed into the sample where it is scattered by suspended particles in the water. The amount of scattering depends on the amount of material in the water, the wavelength of light used and the size and composition of the suspended particles. The TR80 uses a long lived near infrared LED light source and the 90° scattered light method in accordance with ISO 7027 / EN 27027 to assure accurate turbidity values under standardized and comparable conditions. The 90° scattered light detection method is the most common sensor design for turbidity. This sensor has the advantage of a high sensitivity for turbidity throughout the measurement range and a simple optical configuration with an automated cleaning wiper.

The TR80 sensor can be configured for turbidity and/or Suspended Solids and connects with the ECD T80 Transmitter or the ECD LQ800 Multi-Channel Controller. 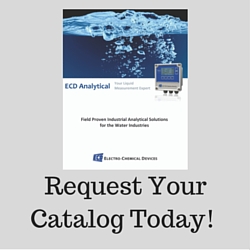